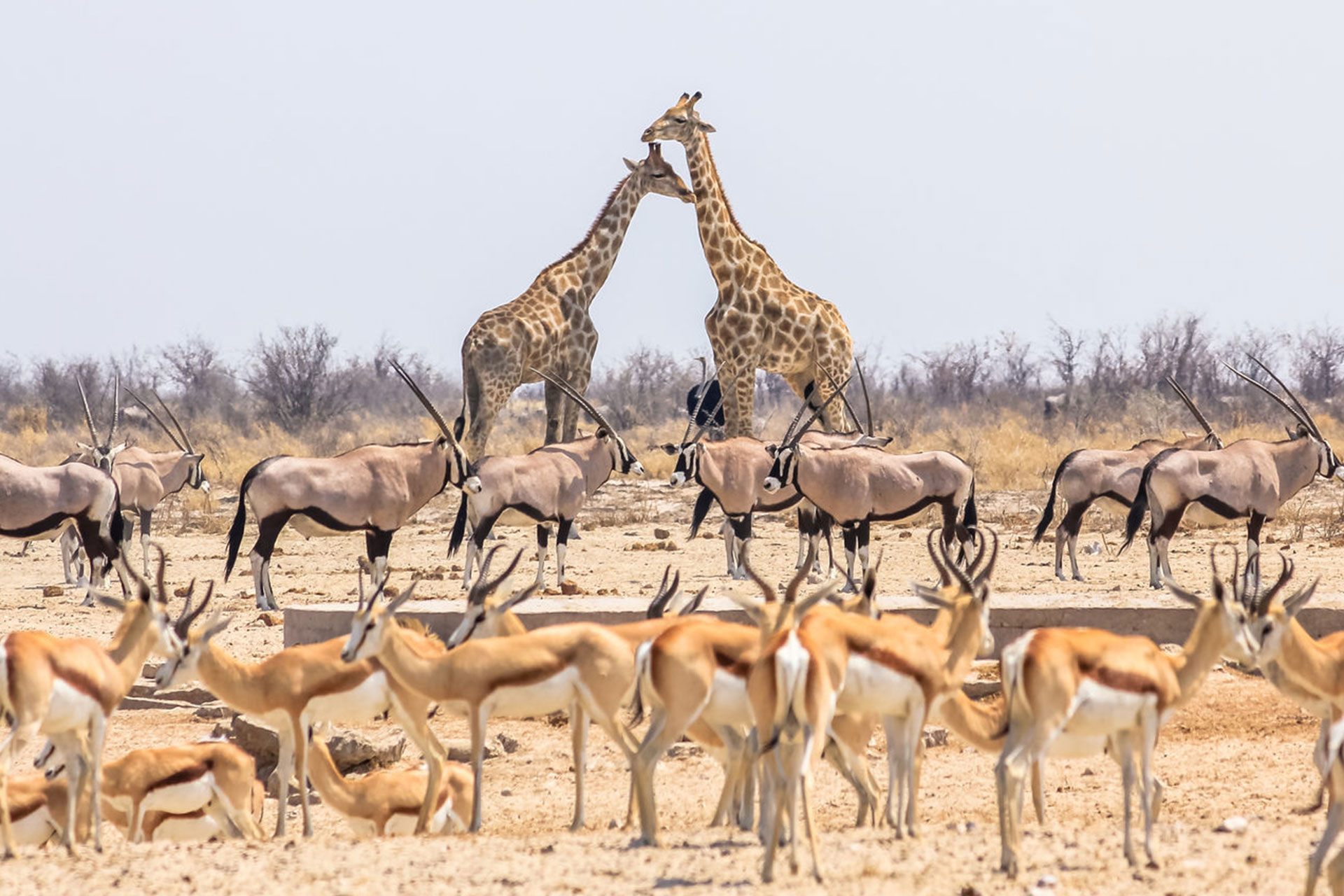 At sunset, the Namib Desert is painted in myriad colors, and its spectacular dunes are the highest in the world. And that is by no means all. The unique desert plant welwitschia that lives to be an incredible 1500 years old, the Swakop River valley with its strange moon-like landscape sculpted by wind and water, the sounds of thousands of seals swimming in the sea and huddled together on land at Cape Cross, the rusted frames of hundreds of ships which have become nesting places for gulls along the Skeleton Coast where the Atlantic Ocean meets the desert, the Himba people with their brick-colored skins, and the captivating beauty and wildlife of the Etosha National Park are other fascinating sights in the remarkable land of Namibia, which has an area of 824,290 square kilometers but a population of just 1.8 million.

Namibia, which borders the Atlantic Ocean in southwest Africa and is known worldwide for its diamond mines and uranium deposits, won its independence in 1990 after long years of colonial rule.

That is where my father and I were going, and one summer evening, we took a THY flight from Istanbul to Johannesburg, arriving early the next morning. From there, we flew to the Namibian capital Windhoek, where we rented a right-hand drive jeep and headed for Karos, 338 kilometers away on the edge of the desert. Here we camped for the night and the next morning entered Namib-Naukluft National Park at Sesriem. The gate here is only opened at sunrise and sunset. The 80 million-year-old Namib Desert has the world’s highest dunes rising to 325 meters. Their glistening orange color and the fineness of the sand are impossible to describe. After driving for 75 kilometers, we parked, and taking plenty of water with us, went for a long walk. First, we crossed dry, parched ground split by deep cracks, and then climbed one the dunes.

Our thick shoes protected us from the heat radiating from the desert, but we prayed that we would not be caught in a violent wind or desert storm.

At the summit, the view was extraordinary, and in the enormous desert, we felt as if we had shrunk to specks!

Our thick shoes protected us from the heat radiating from the desert, but we prayed that we would not be caught in a violent wind or desert storm. At the summit, the view was extraordinary, and in the enormous desert, we felt as if we had shrunk to specks!

After spending the night in Sesriem, we filled up the petrol tank at Solitaire and set out for the coast. Passing through the Gaub Pass and Kuiseb Pass canyons, we traveled the 230 kilometers to Swakopmund on the Atlantic. Swakopmund reminded us of a typical German town, and at a restaurant run by a family of German descent, we enjoyed fresh swordfish with garlic sauce.

Afterward, we went to a shop selling sealskin shoes and were amazed to hear the radio playing a song by the Turkish pop singer Tarkan!

The following morning we set out early to see the welwitschia plant, a unique wonder of the natural world. This 1500-year-old desert plant – which still has many long centuries to live – is named after the Austrian botanist Dr. Friedrich Welsitsch discovered it in 1859. The valley of the River Swakop is famed not only for its welwitschia plants but also for its lunar landscape. Here millions of years of erosion by wind and the river and its tributaries have sculpted a landscape unlike any other in the world.

Our next stop was Cape Cross, a seal megapolis. It was here that the Portuguese explorer Diego Cao, one of the first Europeans to set foot in Namibia, landed in 1486. A drive of 74 kilometers took us to the entrance of the Skeleton Coast National park, where massive animal skeletons of many kinds are scattered all around, sending a shiver up your spine. From here, we traveled 223 kilometers northwards along the coast to Torra Bay.

The road was wide and flat, running between the ocean on one side and the colorful desert. Frequently we saw skeletons and the wrecks of ships. At Palmwag, we stopped for the night and grilled meat over our campfire. We were so exhausted we could hardly stand up, and having set up our tent, tumbled into our sleeping bags. But in the middle of the night, we were awoken by grunting sounds coming from nearby. It was elephants tearing off tree branches and feasting on the leaves. Without making a sound, we waited for them to leave. The following morning we saw their vast footprints and a sign reading, ‘There are elephants around the camp at night. Beware.’

We were now impatient to see the Himba people. We headed eastwards to Purros, where a Herero joined us as a guide. After 10 kilometers, we came to the encampment of a small Himba tribe, with many cattle and goats around. The dogs came out to meet us first, and then we were surrounded by children.

They looked curiously at my camera and wanted to touch it. This remote and forgotten area inhabited only by the Himba people is known as Kaokoland. The Himba are one of the most ancient peoples of southern Africa. They live a primitive life as herders of goats, sheep, and cattle, living off their milk and meat. They are semi-nomadic and move their settlements about ten times a year. At each encampment, they build themselves huts known as ozondjuwo. The Himba never send their children to school, refusing to do so because they would not return to their families afterward. This must be a conscious decision on their part, in their wish to prevent modern life from destroying their traditional culture.

When we reached Ochide the following day, we saw another Himba tribe. We had been advised to wait in the car for them to see us and approach. When a group of adults and children arrived, we looked at each other as if we had come from different planets.

We smiled to break the ice and spoke some of the few words we had learned. When we said, ‘Perivi, uapunduka?’ (Hello, how are you?), their expressions changed. They talked among themselves and sometimes made noises in imitation of goats. The bodies of the women were glistening with a kind of dark red paste called cako. This is made from soil taken from a mountain held sacred by the Himba and is mixed with certain herbs and goats’ fat to create a protective cream. At one point, they came closer to take our arms and pose for the camera, and the cako came off on our clothes. When we left, we presented them with some sugar, flour, and tobacco, which we had been told they liked and set off back to Sesfontein. We arrived at Okaukuejo, the entrance to Etosha National Park, at one o’clock in the morning. Since the park closed at sunset, we spent the night outside. The following morning we went in and drove to Halali, watching the zebras, elephants, giraffes, oryxes, and impalas.

Etosha means ‘great white place’ in the local language. Millions of years ago, this was a vast lake with an area of 4731 square kilometers, but has now dried up and is part of the world’s second-largest national park. Every night there is an open-air concert here, as the animals join in musical night prayer. Wild boar are the lead singers in the chorus, while the cicadas keep up a constant accompaniment. It is difficult to sleep for the noise. Although the camping site is fenced in, pairs of jackals manage to get in and wander around. For safety, it is essential not to feed or approach too close to them.

Returning from Namutoni, we left the hills and desert roads behind, arriving back at the capital, Windhoek, that night. For the first time, we stayed in a hotel instead of our tent, and the next day wandered around the city.

Small as it was, we found it enjoyable to be back in an urban setting again. We delivered the car to the rental company at the airport and flew back to Johannesburg. When we left Africa in our THY plane, our thoughts were on the beautiful sights of Namibia. When I was born in February 1984, I did not know what kind of a world I would encounter. But now I knew I wanted a world of equality, friendship, justice, and sharing, where the powerful and powerless respected one another. 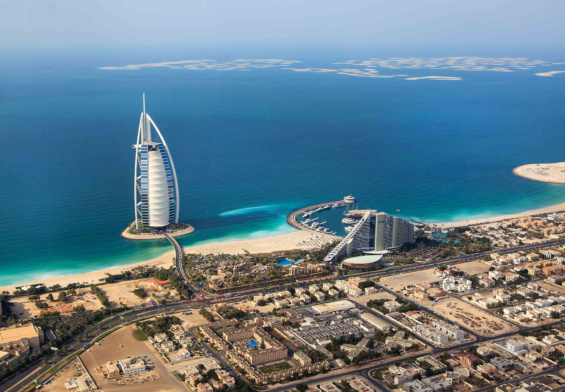 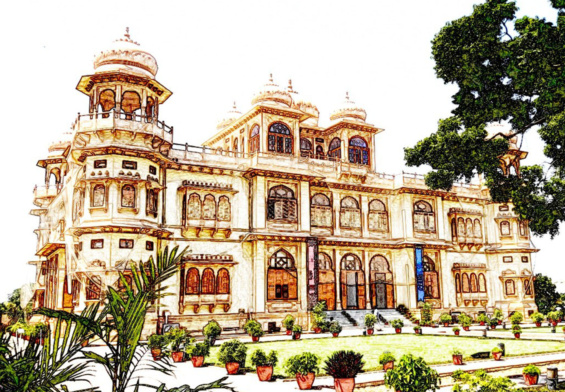